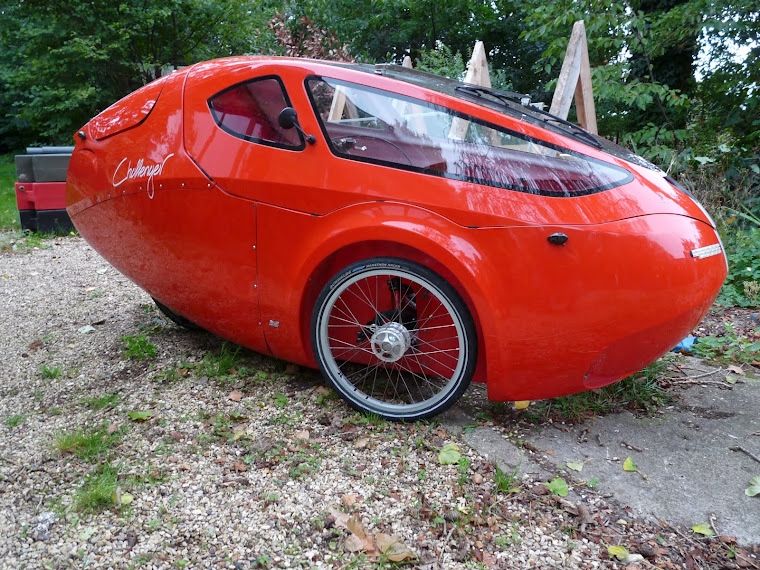 The Challenger Velomobile is a cleverly designed fibreglass fairing made by Marcin Szewczyk at Ocean Cycle in Cornwall (http://www.oceancycle.co.uk/) based around an ICE (Inspired Cycle Engineering  http://www.icetrikes.co/) full suspension trike. I commissioned this to review, for myself, the feasibility of sustainable independent transport with some financial support from Sustainable Routes (http://www.sustainableroutes.co.uk/).

During the public consultation phase of Bicester Ecotown, most of the concerns were centred around increased levels of traffic congestion created by the new development. Obviously, the people complaining about increased traffic congestion are the ones actually creating traffic congestion in the first place. If they were using public transport or walking/cycling to work/shopping they wouldn't actually be stuck in traffic jams. The same people didn't actually see cycling as an alternative option to the car even though Bicester is pretty flat.... at least as flat as Dutch cities where there are very high levels of cycle commuting.

Up to this point, I'd been doing about 10,000 miles a year on my Honda 1800 VTX motorbike and another 15,000 in a Vauxhall Omega diesel.....hardly sustainable and also contributing towards traffic congestion. How could I even comment on sustainable transport if I wasn't practising what I preach? 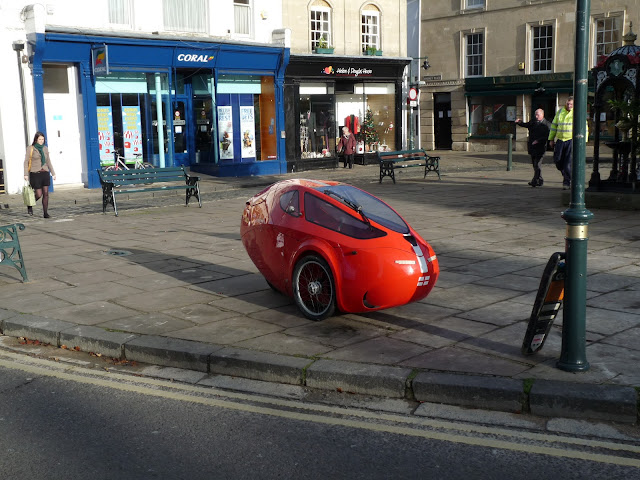 Convenient parking: Can't get much closer to shops!

The added frustration was that our transport consultants could only think buses (hardly a sexy option if we  wanted to attract young business executives and flamboyant entrepreneurs to the ecotown) and our housing partner wouldn't even consider having less than 2 car parking spaces per house (making it impossible to achieve our sustainability objectives) for fear that no one would buy houses without garages, forecourts and roads wide enough to literally take buses. So we were back to designing the typical housing estate based around the car assuming everyone's either old, disabled or unemployed. Few seem to be taking any notice of the newly emerging trend in the US where suburbs, especially in the less wealthy cities, are dying as predicted in the excellent 2005 documentary "The End of Suburbia" (http://www.youtube.com/watch?v=Q3uvzcY2Xug). In many suburbs in Detroit, for example, houses are being demolished and being turned in urban allotments that provide both food and employment to local people. People are now preferring to live closer to the city centres in car-less communities close to work and amenities.

Even in Mexico City, one of the most congested and chaotic cities on earth, I saw that cycling is starting to be widely promoted with "Boris Bikes" and whole inner city highways closed on Sundays to allow city cyclist to parade and show-off their bikes. Not sure I'd like to cycle during rush hour however as there's certainly less regard to human life over there and cyclists risk theirs every time they hit the congested streets.

Public transport is great in large urban centres but pretty useless in rural areas. Even in suburban areas, most people prefer the convenience of independent transport.....jumping into a vehicle and whizzing off to a destination of their choice with complete freedom. Its convenient and that's the point.... no hanging around for late buses or crammed trains and not driving half way around the world just to get to where you actually want to go.

Then there's the status and sex appeal associated with car ownership. This is summed up with Jeremy Clarkson's entertaining  perspective on cars where he judges them on top speed, exhaust/engine tone and how well they can overtake a car-towing-caravan on a country lane, totally ignoring fuel consumption, comfort, and durability.


So can velomobiles similar to the Challenger have a meaningful potential to reduce transport CO2 emissions in the UK? Can they replace some of the frill of owning a sports car or motorbike? Can they become a 2nd vehicle for the average family?

So how did the Challenger hold up to the first 1,000 miles? Well I completed the first 200 without any electric assist but being unfit battled with the serious hill climbs that we have in the Chilterns. The downhills were fantastic and over 50mph easily achievable which certainly surprised a few car drivers. The "rev" of every downhill easily matched that of the motorbike. I even managed to overtake a teenager on a moped along the flat "Fairmile" into Henley, again to his surprise.

However, the hill climbs were always going to be literally a challenge with the low rider cycling position and the additional weight of the fibreglass fairing. The low gearing (22 tooth granny gear with 28 tooth rear cassette on a 20in rear wheel) meant that I was never defeated on any uphill climbs but it was tedious to say the least. After couple of trips to Bicester and back from my home town Wallingford, (a round trip of 56 miles) arriving hot and exhausted, I decided that to achieve my plan to complete 5,000 miles a year would be more practical with electric assist. It would also give me the freedom to quickly cycle to meeting wearing jacket and tie if necessary and be able to increase the radius of where I could commute.

After a series of experiments with different motors and batteries, I have eventually gone for a 20ah Li ion battery with a 250w hub motor. The problem with hub motors is that they always come with a cheap rear 5 speed cassette (14-28 tooth) which leads to poor gearing compared to the 9-28 tooth original cassette. I used to be able to pedal to 28-30 mph but now the gearing runs out of steam at 17-19mph. The motor plus battery added 20kg to the weight which nearly doubles the original weight which is also a downer. Also, it seems that there is considerable "drag" from the electric hub so the 50mph top speed is no longer attainable. BUT what a joy on the overall driving experience! I now use the motor to get me up the hill climbs and quietly support the bikes acceleration and pedal-assist on slight inclines. I've changed the front chain ring to a single 57 tooth cog salvaged from a discarded folding bike which has improved the top speed. The main disadvantage now is that if I run out of battery power, I'm completely stuffed as I have no granny gear and huge additional weight. The range now seems to be between 40-60 miles, depending on the terrain and how much effort I put into pedalling. 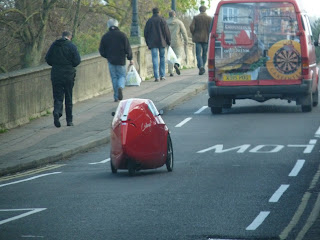 Running Costs
The cost; well to do 800 odd miles has cost less that £1.40 in electricity so we are talking less than £2 per 1,000 miles. A few seconds on the calculator shows that the Challenger will pay for itself just in savings in petrol, insurance, servicing, road tax, parking etc in less than 3 years if I do 5,000 miles per year. If I connect up to my micro-wind turbines, then it's truly free of running costs.

Sex Appeal
Being a single seater, there's little chance of "picking anyone up" but overall most people smile and many take photos and videos of the Challenger. One poor bloke was hanging out of the passenger window videoing with his phone as the car went over a speed bump and subsequently dropped the phone which was run-over by the following car.... bet he cursed me afterwards. There's no doubt that the Challenger gets attention and significantly more so than any Ferrari or Jaguar.

Commuting
Going in and out of town is a dream. Cars tend to give the Challenger a wide berth while overtaking, probably because drivers take a second look at what's in front of them. Commuting between the centre of Wallingford to the centre of Oxford, a distance of about 15 miles takes me just under 50 minutes. By comparison, in the car takes anything from 25-60 minutes depending on traffic. The main advantage is that I can park right outside the shops whereas going by car either involves using the Park and Ride or one of the expensive inner city car parks where there's still a bit of a walk to the shops. The pot-hole designated cycle ways are useless for the challenger even though it's equipped with full suspension. I think the only people able to use them are cyclists riding full suspension mountain bikes because they are really a token after-thought rather than a serious effort that you see in cities on the continent.

You still get the car drivers overtaking only to stop 100m ahead for traffic lights or traffic queues only for me to overtake them 10 seconds later. This "hare and tortoise" flow through traffic congested streets can be really comical.

Wallingford to Bicester is different. With the Challenger I take the back roads through the villages along mostly single track lanes which is the shortest distance and takes usually 1.5 hours whereas in the car I can get to Bicester with no traffic in about 35 minutes going up the M40 motorway. Taking the same country route by car takes just under an hour.

A mate of mine is convinced that the Challenger is a death trap. My feeling is that it's no more so than a bicycle. It's lower of course but it still has a greater presence in comparison. It's safer in that it's impossible to go over the handlebars and it'll be really difficult to roll. On a conventional bicycle, the front wheel can slide from underneath in slippery conditions slamming you into the road and this cannot happen in the Challenger.

It's completely weather-proof with some limited splash-back going through puddles so big advantages over the winter months. Not so good in the summer as it's like being in a green house so need to get Marcin at Ocean Cycle to develop a "soft top" summer conversion.

Niche or Mainstream
Velomobiles like the Challenger are unlikely to take off right now because they are expensive. There are only about 10 companies world-wide manufacturing velomobiles (Challenger is the only UK produced model) and none have attempted mass production. It seems the main restraint to mass production is fear of one of the main car manufacturers coming up with something similar so they remain as small and niche companies with few investors wanting to take any risk in R&D. Therefore, they are probably going to remain expensive. Certainly the cost of the challenger velomobile was eye-watering (£5,000) but so to are top end racing bikes and motorbikes for that matter.


If I keep to my goal of 5,000 miles per year, even this high initial purchase cost will be quickly off-set through savings in fuel, servicing and insurance costs associated with running a car. If the cost of fuel continues to increase at the same rate over the next few years then this will be even quicker. The purchase cost also becomes more bearable if you include gym membership fees which would be unnecessary for velomobile owners.

Many people have said that "they want one" but translating this into actual velomobile sales would be difficult. The Challenger would definitely appeal to those who loose their driving license and to those wanting something different for commuting. It has definite status appeal for some and provides an exciting option for independent sustainable transport. We now start to design buildings that incorporate velomobile ownership e.g. charging/velomobile shed (NOT Garages) and see where this takes us.........

Let's hope that urban and transport planners do their bit and seriously look at ways to promote cycling so that it CAN change the way our towns and cities are developed in the future thus helping us develop a low carbon future. 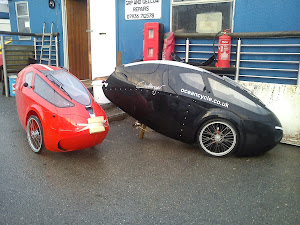